When Pouroo Dorabshaw flew to Los Angeles four years ago on a business trip, her mother urged her to visit a family friend just outside the city. The friend, it just so happened, was having a party the night of Miss Dorabshaw’s arrival. There was even another guest who could drive her straight from the airport. 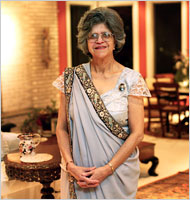 Roshan Rivetna is a member of the small and shrinking Zoroastrian religious group who volunteers as a matchmaker for people within the religion. 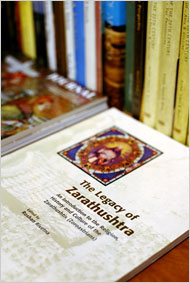 A book by Roshan Rivetna reflects her dedication to preserving her religion.

So through two hours of gnarled freeway traffic, Miss Dorabshaw, a corporate trainer from Ohio, sat beside a California accountant named Yazdi Dastur. They quickly discovered they both were Zoroastrian by faith, both Indian immigrants to the United States by experience, both signed up for a conference on telemarketing.

Over the course of the party that evening, Mr. Dastur asked Miss Dorabshaw if she was interested in visiting Disneylandthe next day. (No thanks, she had already gone.) Then how about Universal Studios? (Sorry, been there, too.) But there were some new attractions there that surely Miss Dorabshaw had not seen.

At about that persistent point, or maybe over dinner the next night at Red Lobster, the realization crept over Miss Dorabshaw that all this coincidence was not coincidental at all. It turned out that both Miss Dorabshaw’s mother and Mr. Dastur had used the same matchmaker, a retired nuclear physicist in suburban Chicago, and the entire intent of the weekend had been to nudge two unmarried Zoroastrians on the road not merely to matrimony but endogamy.

Exactly that happened on April 7, 2006, in what Mrs. Dastur (as she now is) believes to have been the first Zoroastrian wedding ceremony in the history of Columbus, Ohio. Meanwhile, the matchmaker, Roshan Rivetna, moved the papers with the Dasturs’ personal information from her active files into the folder containing about 50 other successes.

All this social engineering defies the American model of romantic autonomy, love-for-love’s-sake, which reaches its commercial apex a week from now on Valentine’s Day. It also goes beyond the sort of formal and informal matchmaking that is common within dozens of religious and ethnic communities. For the small and shrinking Zoroastrian population, both in the United States and abroad, the voluntary efforts of brokers like Mrs. Rivetna are driven by the imperative of survival.

“I felt that I owed it to my ancestors,” Mrs. Dastur said in a telephone interview this week. “They did whatever they had to do to survive. For them, I was trying to keep the culture and religion alive.”

Once the religion of millions in ancient Persia, Zoroastrianism now counts 124,000 to 190,000 followers worldwide, and about 10,000 in the United States. While the most precipitous decline in its numbers came from the Muslim conquest of Persia in the 10th century, more recently Zoroastrians have been, paradoxically, the victims of tolerance.

Their religion does not formally bar interfaith marriage. Ambitious, highly educated and upwardly mobile, Zoroastrians inevitably study, work and socialize outside the community.

In polyglot countries with (relatively speaking) substantial Zoroastrian populations — Australia, Canada, England, India and the United States — the rate of mixed marriage has reached as high as 40 percent in recent years, according to statistics compiled by Mrs. Rivetna for the quarterly magazine Fezana Journal.

“I cannot but feel in my heart,” she wrote in an editorial, “that, unless we sit up and do something, it could very well be the ‘sunset,’ if not the ‘twilight.’ ”

Such anxiety is not, of course, the province of Zoroastrians alone. The American Jewish community has been for decades in a state of turmoil over an interfaith marriage rate that various studies place at 40 percent to 50 percent. Still, there are roughly 600 times as many Jews in the United States as there are Zoroastrians. There are, for that matter, more Amish, more Wiccans, more Taoists, more Baha’is.

Yet the fate of Zoroastrianism has some relevance to other faiths. At its origins about 3,000 years ago, Zoroastrianism was the first religion to worship a single god. Its theology perceived a cosmos divided between good and evil, and an afterlife that could be achieved through an earthly life of goodness. In all those concepts, Zoroastrian doctrine influenced Judaism, Christianity and Islam.

“We are a roots religion,” Mrs. Rivetna put it.

Her campaign to preserve her religion began about 20 years ago, as she first collected the names and profiles of prospective matches. When she and her husband, Rohinton, founded the Fezana Journal in 1991, she started writing a monthly matrimonial column. It persists to this day, offering thumbnail sketches and contact information for Zoroastrians from Karachi to Sydney, from Manhattan to Mumbai.

“At first I was a little apprehensive,” Mr. Dastur recalled of placing his listing with Mrs. Rivetna. “It looks like you’re on sale. But then I started thinking rationally, that a lot of people would see my ad, rather than just telling people mouth to mouth.”

What Mrs. Rivetna has done is bring a scientist’s sense of order to the traditional role of the Zoroastrian “aunty.” That communal endearment refers to a middle-aged or older woman likely to plop down on the sofa next to any eligible young lady — who may at that moment be rolling her eyes knowing what is coming next — and start talking up “a nice Zoroastrian boy who’s perfect for you.”

The biannual conferences of Zoroastrians from throughout North America, or less frequently from around the world, also serve a kind of speed-dating purpose. Mrs. Rivetna gave major play in Fezana Journal to the wedding of Cyrus Mehta, an immigrationlawyer-cum-conductor, and Liley Gheewalla, a financial analyst and cellist, who had met through an all-Zoroastrian orchestra being assembled to perform at the Zoroastrian World Congress.

Mrs. Rivetna has never even considered charging for her services. “When a match is made,” she said, “I’m amply rewarded.”