ParsiNews.net
Home Parsi News Iranians put a yoke on the neck of the defeated Roman Commander-in-Chief

On 20 December AD 69, Flavius Vespasianus, the Commander-in-chief of the Roman conquests in the East,entered Rome and the Roman senatevoted for him to become emperor.  The same day that Vespasianus (as Josephus, the historian, has written) gained the yes vote from the Roman senate, he wrote a letter to Vologases I (Balash), the then king of Iran, and while thanking him for his promise to send military aid, stated that he did not need his help any more.  Following the suicide of Nero, the Roman Emperor, a few of the Roman generals, including Vespasianus, who was inEgypt, asked for his replacement.  The senate designated Vitellius as acting Emperor until the final decision was made.  The eastern army of Rome announced their support for Vespasianus to become emperor.  The multiple candidates for the Roman Empire brought this empire to the verge of civil war.  Meanwhile, Vitellius was prepared to go into war with Vespasianus and the request of
Vespasianus from Vologases I was to ward off this rival.  Vologases I had promised to send 40,000 soldiers.  Vespasianus, who had already come to the East with 60,000 armed soldiers for beating the Jew rebels, without needing more forces, had removed Vitellius from his way.  During the 10 years of his kingdom (AD 69 to 79) Rome kept amicable relations with Iran.  In Nero’s period of reign – AD 62 – Iran defeated the Roman army which was assigned to East Anatolia, comprising Legions 4 & 12, commanded by Lucius Paetus and forced them to surrender, and put a yoke on the neck of Paetus and after this defeat and designation of Tirdad, the Parthian prince, as the ruler of Armenia, peace was established between the two super powers of the time, and Iranian ceased to instigate the Frank tribe and the ruler of Samosata against Rome.

The Huns, a twofold danger for Iran and Rome 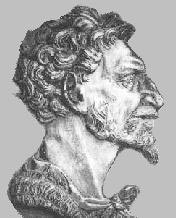 The threat of the Huns, who had started moving from northwest China, two centuries before, was becoming serious for the two great world empires – Iran and Rome – in AD 230.  One group of the Huns had settled the same year in Central Asiaand later started their invasion into Iran.  Another group had progressed upto France and were defeated by the Romans and the French under Roman command, and named the present dayHungary their country and stayed there.
They named Hungary Pannonia, and the Roman government, in order to quiet them, agreed to their settlement in Pannonia.
The skin color and looks of the Huns, based on their distance from the Mogul settlements, varied.  Those who were closer to the Caspian Sea had fairer skin and Iranians would call them white Huns.  Iranians would call all the Huns ugly looking and this had become a complex for the Huns, to an extent that after reaching Europe and several victories over each European land – from south Russia and Danube shores upto Germany and France – they would marry beautiful women in order to change the looks of their children, and the relative good looks of the Hungarians is due to this reason.  After becoming neighbor with Iran the Huns were attracted by the law and judiciary system of Iranians, and for this reason, would seldom kill the defeated and the surrendered or trespass the women.
Priscus writes:  Huns tried many military plans and plots to penetrate into the main territory of Iran but did not succeed.  Once, they passed through the mountains for 15 days in order to enter Iran from the Caspian Sea borders, but as soon as they started descending from the mountains they confronted the Sassanian cavalry force which was unique in its time, and this event resulted in their diverting their route towards Europe and start raiding that land.
From the 3rd and 4th century AD, when the Huns settled on the shores of Danube, the Roman Empire did not have a moment of peace.
The Roman Empire ceased its invading policy after repeated defeats during the reign of Ardeshir and his son, Shapoor, and also Shapoor II.  Augustinus presented a new doctrine which was to end the policy of world conquest and be content with what they had upto that day, and this doctrine turned into an unwritten law from the time of Tiberius, and from that time onwards it was Iran who kept its invading spirit, to an extent that the Romans, through fright, were first forced to build an eastern capital (Constantinople) and then submit to division of the Empire, and then surrender to the invading emigrants from the west and finally disappear.
The power of Iranians in the Sassanid period was mainly because they would not cease to equip their army with new weapons and war tactics.  The Sassanians paid full attention to their cavalry.  The soldiers had no limitation in using arrow and were not restricted to 30 arrows, like the Huns and the Romans.  Each soldier had one horse and two spare horses and the Iranian army had one special ever-ready force which was constantly prepared for emergencies.  The Romans copied the Iranians after settling in Constantinople.
In the 5th century AD, when the Romans found themselves under pressure of Attila, the Hun leader, they deceived him, while he was invading the Black Sea shores, to enter the Iranian territory, but the Iranians beat him so badly in the northern borders of Armenia that he never took Iran’s name any more.
The attacks of the Huns on the Roman territory gradually ended with the death of Attila, in AD 453, and their domination was limited, for some time, to a part of Hungary.  Attila was so much loved by his people that instead of shedding tears they would cut their veins and shed their blood, in his grief.  Before his death, Attila had proposed the sister of the then Roman emperor and had demanded half the Roman territory as her dowry.